The turnover ceremony between the outgoing and the incoming regimental-sergeant-majors took place at "Mario Fiore" barracks in Motta di Livenza (TV), headquarters of Multinational CIMIC Group, a Unit of the Italian Army specifically designed for civil-military cooperation (CIMIC).

Colonel Francesco GRECO, Commanding Officer at MNCG, presided the official hand over in front of the entire regiment, including multinational representatives of the contributing nations and representatives from the different Armed Forces who form the ranks of MNCG. There, he took the opportunity to emphasize the duties and responsibilities of the regimental sergeant major, in the daily activities of the Unit.

Chief Sergeant Major Fabio PERONI belongs to the Engineers' Corp. He joined the military in 1984 and was posted to Multinational CIMIC Group in 2012 after one tour of duty at the Italian Delegation to the Atlantic Council in Brussels.

Regimental Sergeant majors are nominated by Regiment Commanders and are identified amongst Non Commissioned Officers who distinguished themselves through time for their conduct, professionalism and leadership in light of a sufficient time of service in the Unit. 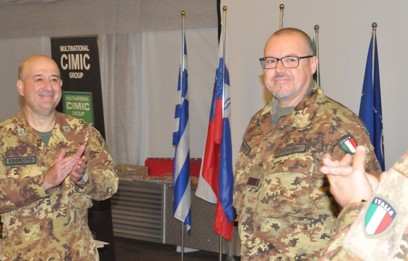 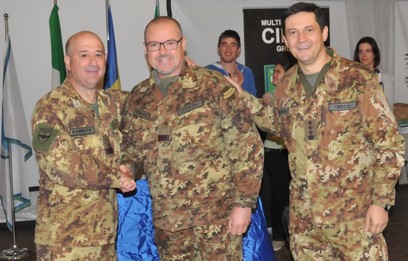